It’s that wonderful time of year when the long, warm days of summer are spread out ahead of us and with the colour of garden flowers beginning to intensify. The different areas of the garden are transforming at a pace; with the Reservoir Garden exploding into growth and the Water Garden becoming a cool oasis as the temperature rises. 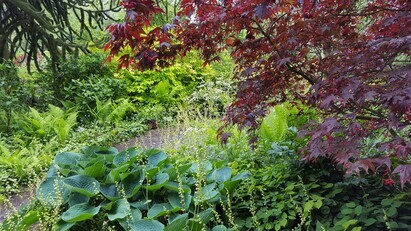 A wonderful combination for a spot in partial shade together with a moisture retentive soil.

1. The tall stems of Tellima grandiflora (Fringe Cups) hold a profusion of cup-shaped, greenish-white flowers from May till July, gracefully drifting through the planting. This scented perennial fills the space with the fragrance of old-fashioned pinks. 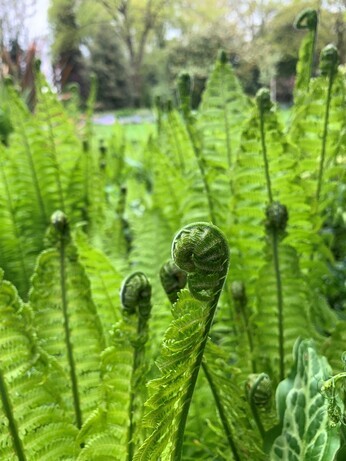 2. The dainty, pale-green fronds of Matteuccia struthiopteris (Shuttlecock or Ostrich Fern) unfurl from the tips to deliver feathery plumes in late spring. This elegant, upright fern works particularly well when planted in groups among other shade-loving plants. Here it is planted with lamium which sprawls beneath it, utilizing the space around the base under the upright fronds. In winter, after the fronds die back, dark brown, fossil-like, fruiting fronds are left behind adding interest in the garden.

3. The giant blue, deeply veined, heart-shaped to rounded leaves of Hosta sieboldiana var. elegans add a dramatic element to the planting, growing up to 45cm long and 30cm wide.  In summer, the impressive foliage is accompanied by lilac-tinged, white flowers, rising to approximately 65cm. 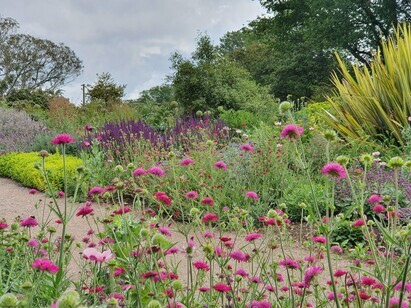 This planting combination delivers a long season of interest, with lengthy flowering times followed by beautiful, architectural seedheads. It is a combination that is also incredibly attractive to bees and other pollinators throughout summer. All these plants are happiest growing in full sun with a free-draining soil. 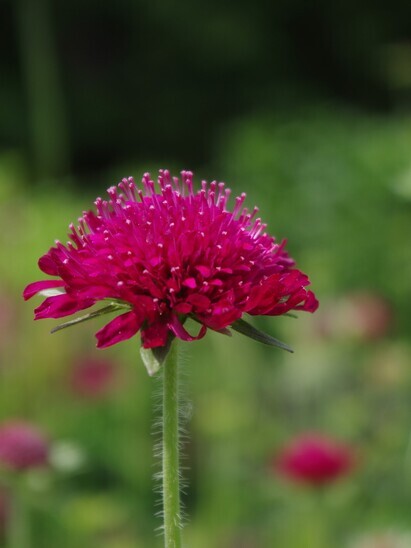 1. The crimson, pincushion flowers of Knautia macedonica (Macedonian scabious) bloom in succession from early summer through to autumn. The branching, slender stems reach up to 80cm in height, delicately mingling with surrounding plants, producing a light, airy effect.

2. Salvia nemorosa ‘Caradonna’ (Balkan Clary) is a popular plant with many gardeners, producing striking, rich, violet-blue flowers held on dark purple stems bringing strong colour to the planting. If cut down after flowering has finished, a second flush of flowers will be produced extending the flowering period through to September. Growing to approximately 50cm in height, it is great for the front or middle of a border. 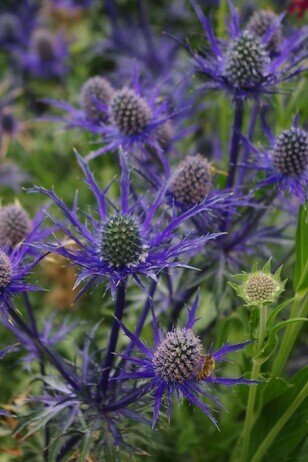 3. In the centre of the picture, Erygium x zabelii (Sea Holly) can be seen as a rich-blue haze intermingling with Knautia macedonica in the bed opposite. The iridescent, steely blue flowers and bracts are like nothing else in the garden and the spiny, thistle-like heads add texture and form to the planting. Once flowering is over, the architectural seedheads continue to add interest through till winter. 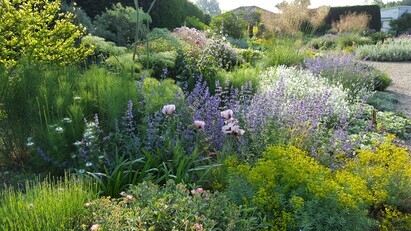 A delicate blend of plants flourishing in the Gravel Garden where the soil is poor and free draining. Beth selected plants for this area of the garden which would be able to survive in the harsh growing conditions with no irrigation, only receiving the very little rain which falls in this dry part of Essex. 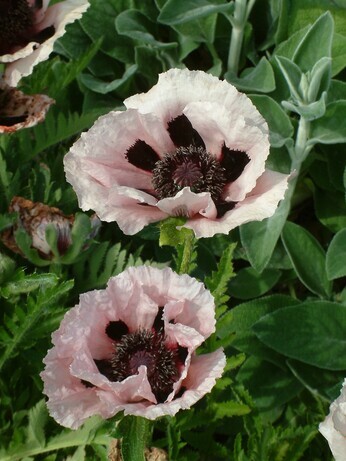 Floating above the lower planting are the huge, grey-pink, frilled petals of Papaver orientale ‘Cedric Morris’; a dramatic feature in the Gravel Garden. This perennial poppy grows to heights of 80cm above clumps of lance-shaped foliage, which if cut back after flowering will encourage a new flush of fresh foliage for late summer. It is a seedling raised by and named after Beth’s friend Sir Cedric Morris. At the base of each petal is a dark purple stain which is mirrored in the stems of Phlomis tuberosa ‘Amazone’ growing just behind. The branching stems of this elegant phlomis stand tall to approximately 1.6m, carrying whorls of tubular, soft-lilac flowers produced from July till September.

2. The strong blue flowers of Nepeta racemosa ‘Walker’s Low’ drift through the planting breaking up the varying shades of green. It is a long-flowering groundcover in this sunny border, attracting pollinators all summer long. After its first flush of flowers, it can be cut back to promote further flowering through to September.

3. To the front of the border, the tiny lime-green flowers of Euphorbia ‘Blue Haze’ are held above whorls of glaucous, blue-green leaves. It has a lax growing habit with a height and spread of 80cm. There are many varieties of euphorbia repeated in the Gravel Garden, all combining to draw the eye through the garden. 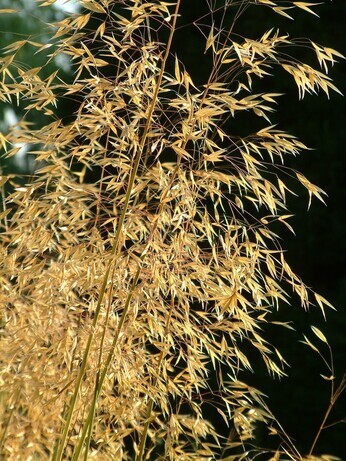 4. The golden, oat-like flowerheads of Stipa gigantea (Giant Feather Grass) shimmer and glisten in the top right of the picture. This stately, semi-evergreen grass grows to 1.8m in height and spread, with flowerheads held on tall stems above a clump of grey-green, slender leaves. Once flowering has finished, the seedheads dry out naturally on the plant and remain well into winter, adding late season interest to the garden. 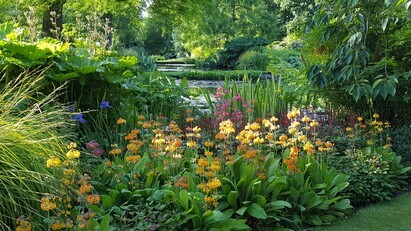 A charming combination found in the Water Garden where the plants are offered a reliably moist soil. This range of plants grow in full sun to part shade, receiving sunlight later in the day. The jewel-like flowers stand out against the leafy back drop of lush greens from the early summer planting. 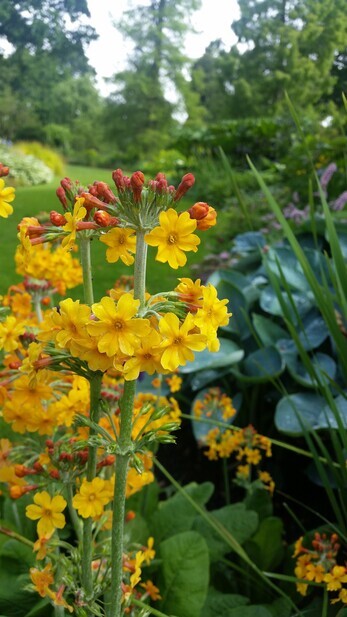 1. The leading colour from this combination comes from the beautiful candelabra primula, P. bulleyana (Bulley’s Primrose), where the rich, golden-yellow to orange flowers glow at the front of the border. After flowering has finished, attractive seedheads remain, creating further interest. Similar to P. bulleyana is P. beesiana, delivering the same candelabra type flowers, however flowering begins a month earlier with colours ranging between pink and magenta. Similar to both these is a hybrid of the two: Primula x bulleesiana which bears reddish pink flowers with a yellow eye, in June and July.

3. The deep, purply-blue flowers of Iris sibirica ‘Silver Edge’ show up against the backdrop of lush green Darmera peltata leaves. The rich, velvety flowers add to the opulent feel of this border from May to June. 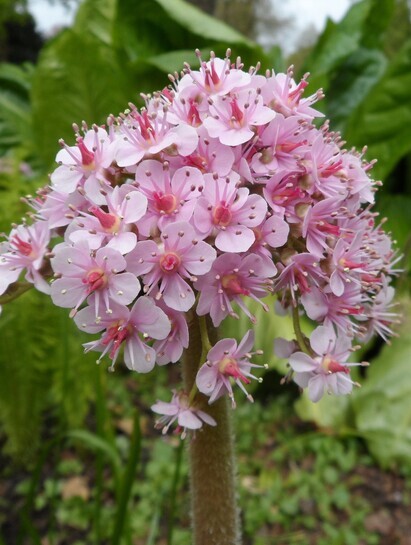 4. The parasol-shaped, scallop-edged leaves of Darmera peltata (Umbrella Plant) stand tall up to 1m high and 50cm across, creating a mound of eye catching, lush green foliage. The leaves are gunnera-like in appearance; however they are smaller and held on slender stems; a perfect alternative for a smaller space.  In early spring, before the leaves emerge, rounded heads of pale-pink flowers rise from the crown on tall naked stems. 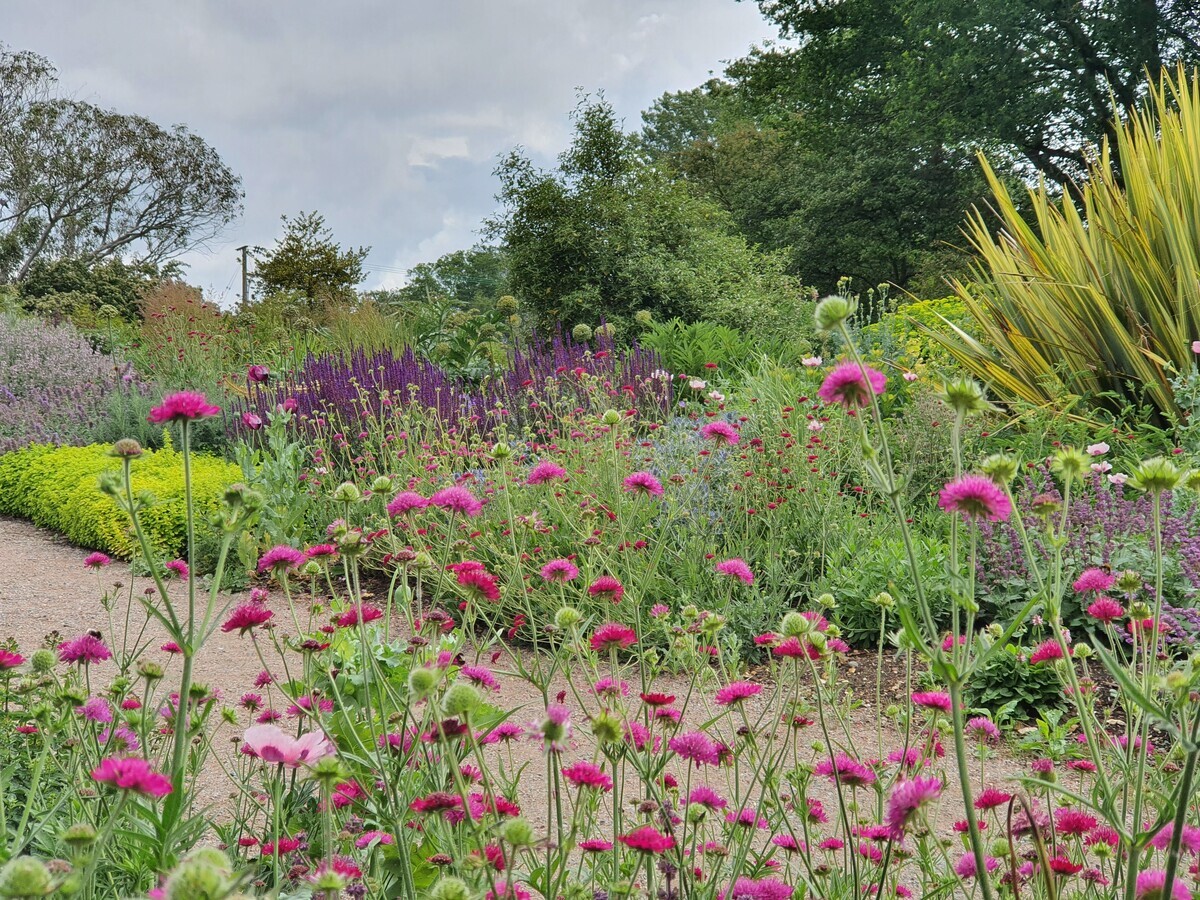 Salvia nemorosa- how to grow and care for

The species name- nemorosa (‘of woods’) refers to the natural habitat of this salvia, typically found growing in groves and woods across central Europe and Western Asia.