Towards the end of summer and into the autumn, there are some species of bulb and corm that begin to flower, complementing late flowering perennials such as aster, rudbeckia and hylotelephium (sedum) along with late grasses like miscanthus, panicum and pennisetum.

They can provide a welcome flush of colour in a fading summer garden.

Over time, some will multiply and create drifts, flowering en masse through grass, under trees, in gravel or through ground cover plants that have long since finished flowering.

They are easy to grow and care for, and achieving a mass effect often takes little effort other than time and patience. 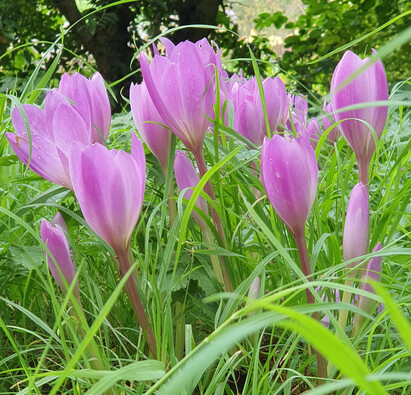 These are some of the most striking of the autumn flowering bulbs, as the flowers can be quite large, the size of a small hand.

In shades of pink and mauve as well as pure white, their goblet-shaped flowers can push through tough mats of ground-covering plants such as vinca (periwinkle) and symphytum (comfrey).

Other Colchicum we have in the garden include pale and dainty C. ‘Pink Star’, C. bowlesianum and C. aggripinum, that has a subtle checked pattern over its tepals (which people will recognise as petals).

They are sometimes called naked ladies, as when they flower they do so without their leaves, these having emerged and died down in the spring, feeding the bulb ready for flowering in the late summer and autumn.

The flowering-sized bulb is elongated, about 10cm long with a shiny dark brown smooth skin. They give rise to offsets that take about four years to reach flowering size.

The clumps can eventually get quite congested and push towards the surface, and the time to lift and divide them is in late summer and autumn, even when flowering.

Lifting them in spring or early summer when they are in leaf disturbs their roots and the production of the food reserves they need for flowering later in the year.

In Beth’s garden they grow everywhere except in the wettest soils, preferring dappled shade.

All parts of the plant are toxic. 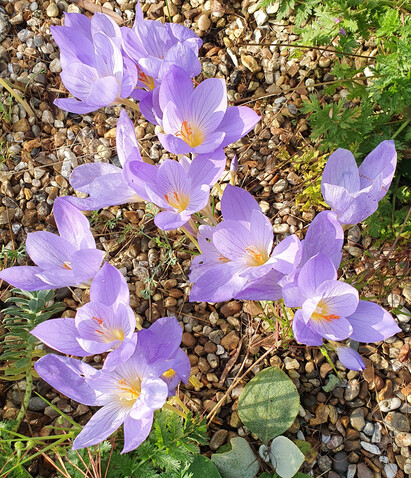 True autumn crocus belongs to the iris family, Iridaceae and shouldn’t be confused with Colchicum which are often mistakenly referred to as autumn crocuses. The most well-known autumn-flowering crocus is probably Crocus sativus, the saffron crocus, from which the spice comes.

They are shorter and daintier than colchicums and the flowers are a little more delicate, often with long slender throats.

They enjoy the support and protection of other low-growing plants around them, including rough grass, which can stop soil splashing onto their petals during rainfall.

They like a sheltered spot where the flowers won’t be damaged by wind or heavy rain, and plenty of sunlight too, otherwise their flowers won’t open.

All prefer free-draining soils, and some enjoy moisture such as C. bannaticus.

The corms are small and offset readily, and drifts of autumn crocus can be achieved relatively quickly if they enjoy the conditions where they are planted.

Some will flower without their leaves like colchicums, so if they are planted in grass, be aware that the area won’t be able to be mown either when the flowers are showing or when the leaves are, as they are needed to replenish food reserves in the corm.

Here at Beth’s, C. serotinus subsp. salzmannii and C. kotschyanus subsp. leucopharynx. are growing in the Gravel Garden, while a carpet of blue C. speciosus is growing and multiplying happily under a Taxodium in the Water Garden. 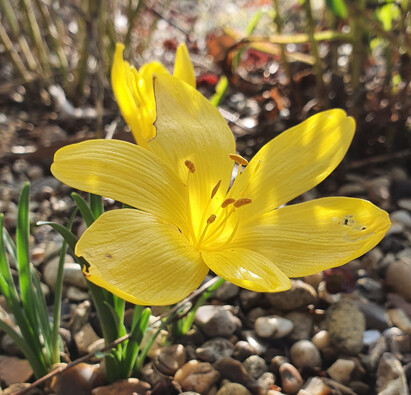 Sternbergia look like crocuses but are from a different family. They are in the Amaryllis family, their flowers have six stamens, and they grow from bulbs.

Crocus on the other hand, are in the Iris family, their flowers have three stamens and grow from corms, not bulbs.

To confuse matters further, the common name of S. lutea, which we have growing in the Gravel Garden, is autumn daffodil, yellow autumn crocus, or lily-of-the-field. Therefore, it’s helpful to know Latin names, even though many people can be a little intimidated by them.

The flowers of S. lutea emerge at the same time as their leaves, so they remain dormant for a longer period than many of the autumn crocuses we have growing, which have leaves and flowers at different times.

The clear, deep yellow flowers of S. lutea are a welcome contrast to the pink and blue hues of the other bulbous plants flowering in autumn.

Sternbergia lutea originates from a wide geographic area, from the western edge of the Mediterranean to Central Asia, and likes grassland, rocky soils, and the open edges of woodland. 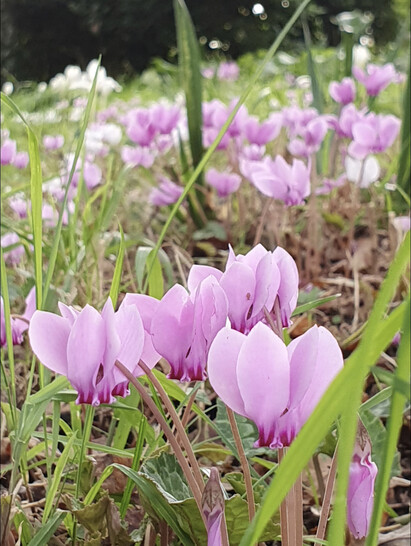 People often try to plant cyclamen, given to them as a gift, outdoors in the garden only to find that they don’t survive. These are usually derived from Cyclamen persicum, often big and blousy and are not frost hardy.

Those flowering in Beth’s garden in the autumn are mostly Cyclamen hederifolium, although C. purpurascens and C. cilicium are other autumn flowering species that are hardy in the UK.

C. hederifolium have handsomely marked ivy shaped leaves that appear at the same time as the flowers. Once the flowers have finished, the stems coil into springs, ready for when the old flowerhead becomes a seed pod and the ripened seeds release into the surrounding area.

They colonise areas and form low carpets of dainty flowers in every shade of pink to white.

Their tiny seedlings take about four years to get to flowering size, but the adult corms can eventually reach 20cm across or more.

If they need to be lifted and transplanted, it’s best to do this when they are dormant in early summer, and it’s very important to plant them up the right way – the smooth side faces downwards, the top is where all the roots and growth comes from.

They don’t like being planted deeply, but just under the surface of the soil.

They are a Mediterranean plant and like free-draining soils, especially where there’s lots of leaf-mould.

They thrive best in dappled shade, but will grow in difficult dry shady spots, bringing welcome colour and interest.

In our grassy walk beside the Woodland Garden, they have naturalised very happily in the grass, and contrast well with the much larger colchicums that flower at the same time. 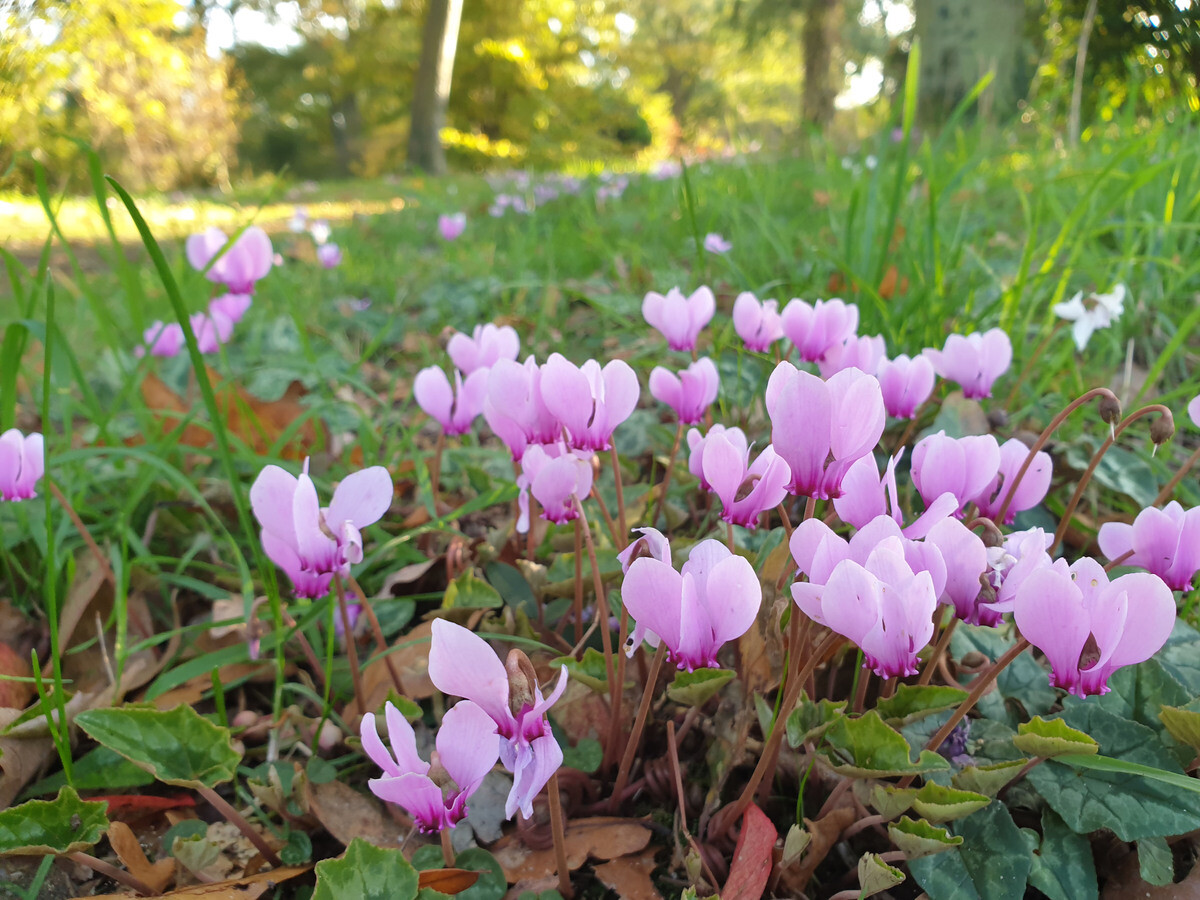 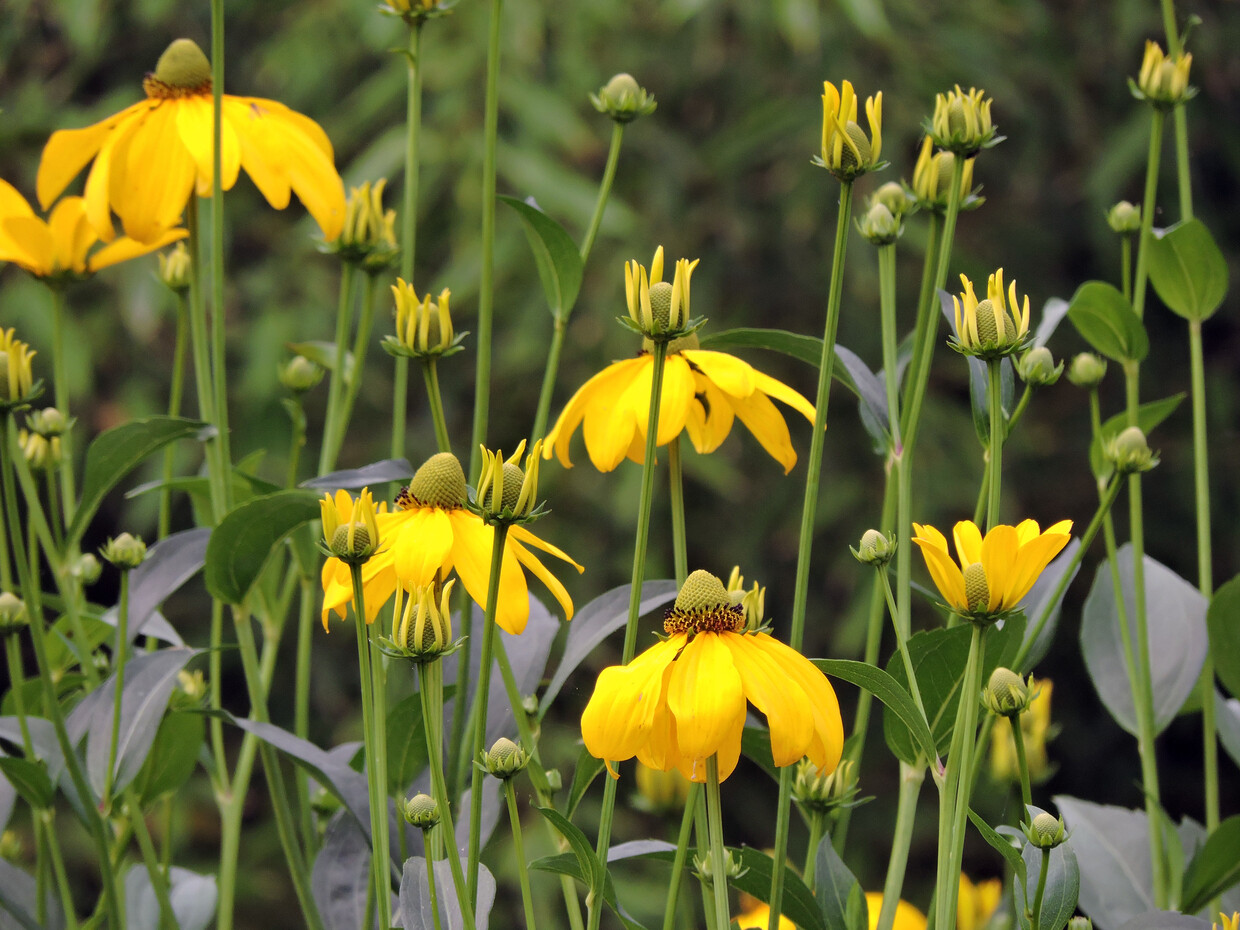 The Chelsea Chop- How To Do It

Read about the Chelsea chop and watch our video showing how we do it. 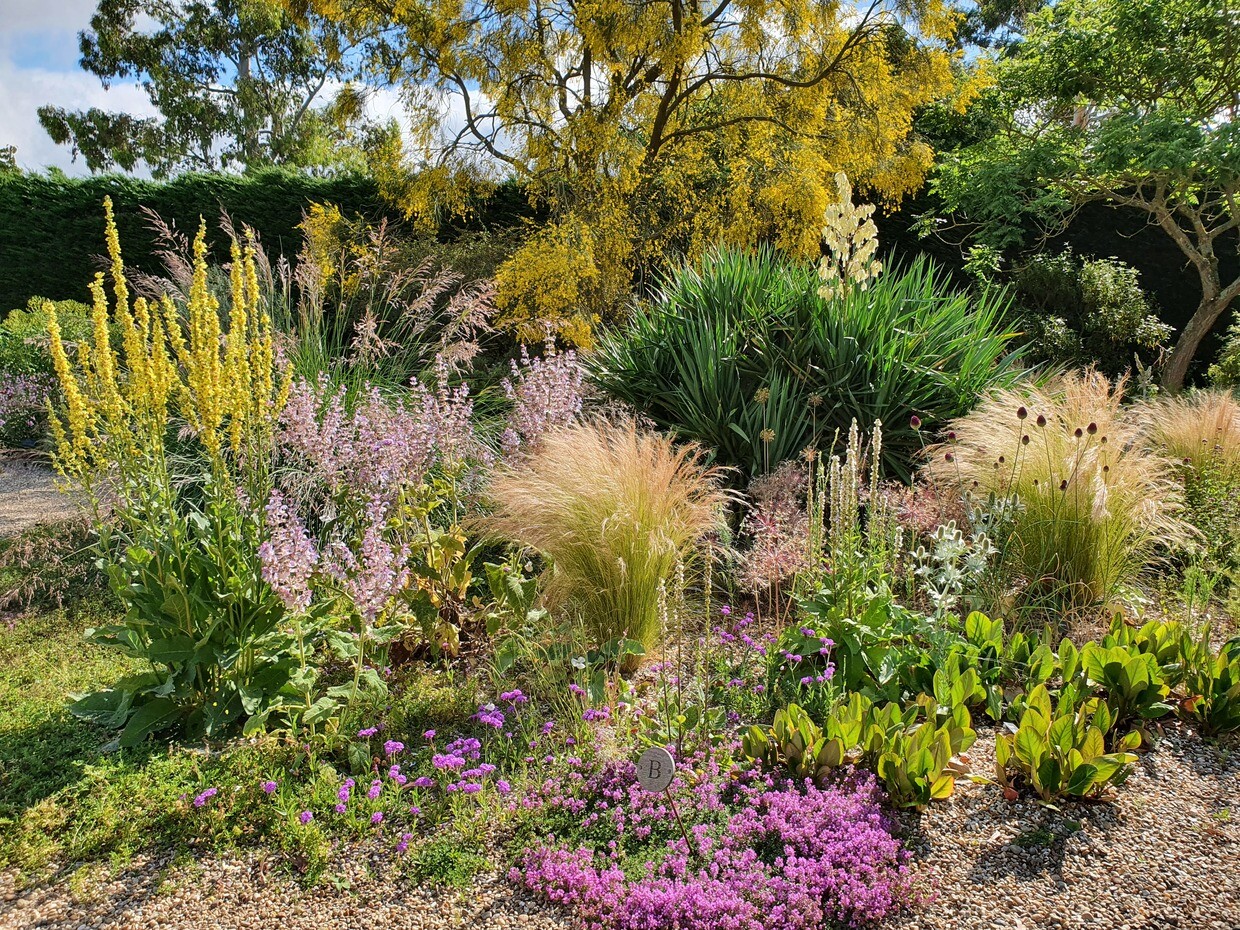 Learn how Beth created her world famous Gravel Garden and how the garden team now maintain it. 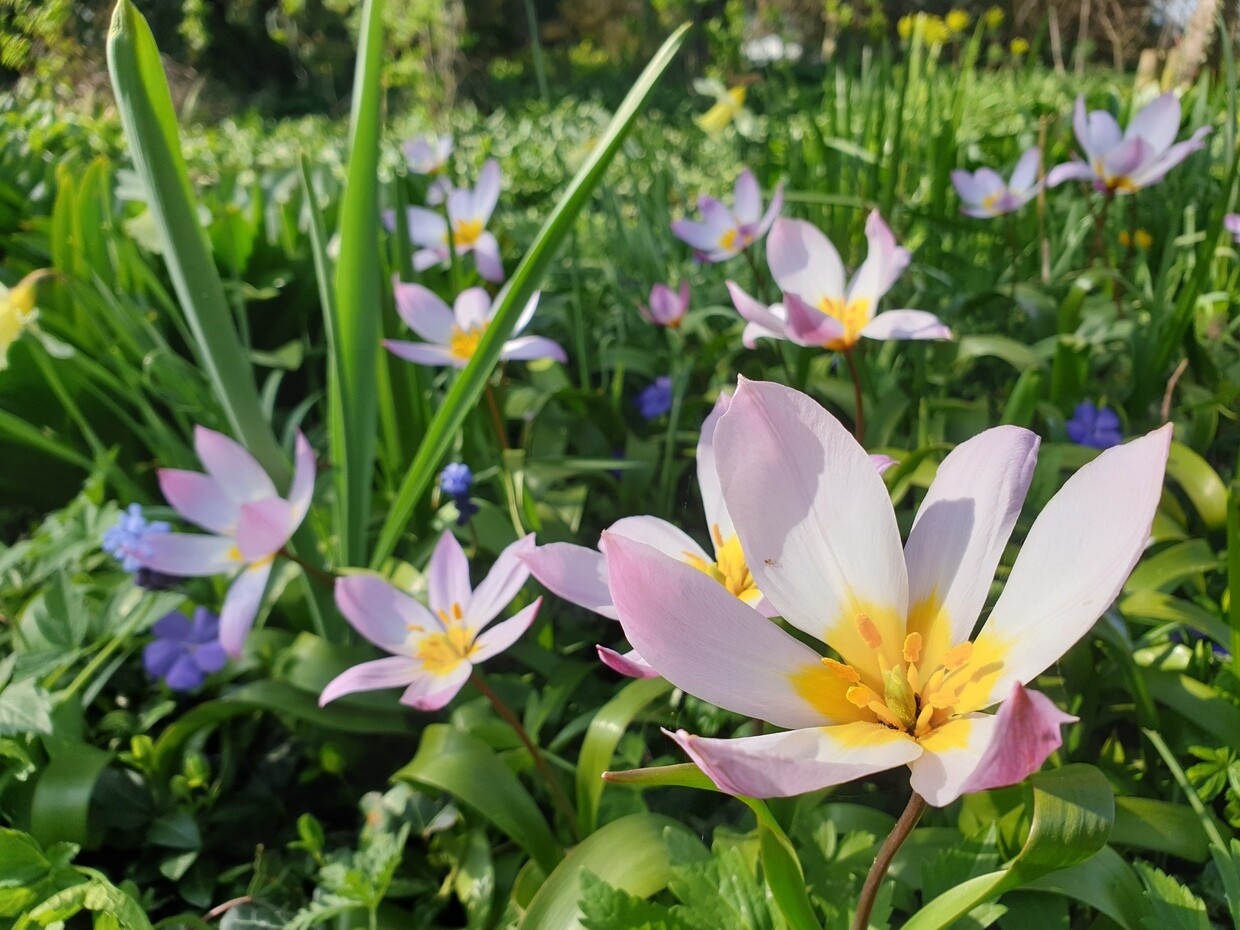 Species tulips and how to grow them

The key to success with all plants is understanding their origins, helping you to realise their preferred growing conditions and specific requirements. Tulips grow wild high up in the mountains and valleys of Europe and Central Asia, indicating they are adapted to growing in free-draining, rocky soils in extreme conditions. Summers here are long, hot and dry, with cold winters bringing heavy rainfall.