One of the beauties of Beth’s Gravel Garden design is it allows for empty space in the planting - gaps which are then disguised by the gravel mulch. Of course, sometimes what appears as empty ground in the winter is actually filled with permanent plants - dormant perennials and bulbs that are ready to fill the space - in spring, summer and autumn.

But we often purposefully leave areas completely empty of permanent planting. In this way, it can fill naturally with self-seeding ‘pioneer’ plants. They are called pioneers because in the wild they are the first to colonise newly open ground – which in nature might happen after a wildfire, or a tree falling.

They can be perennials, biennials or annuals, but one thing they have in common is that they produce a lot of seed and like enough open space for their seeds to germinate and grow. 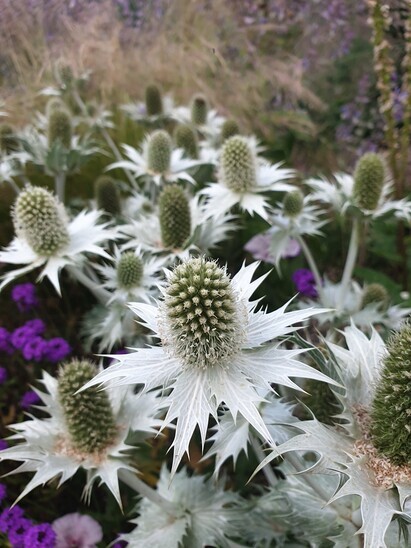 These plants like to seed into empty ground because they don’t like competition from other plants. If you’ve tried growing Verbena bonariensis at the back of a crowded border, you may find it disappears in the second year. Unhappy with where it’s been planted it soon peters out, but its offspring happily germinate where there’s more space, at the front of the border perhaps, or among the paving stones.

We try to keep areas in the Gravel Garden empty enough to allow these plants the space they need to grow successfully. But we also try to stop them being too successful, and taking over entirely.

Although in large groups these plants can look spectacular, Beth liked us to ‘edit’ out many of them so that they didn’t swamp the planting completely and smother the other types of plants. 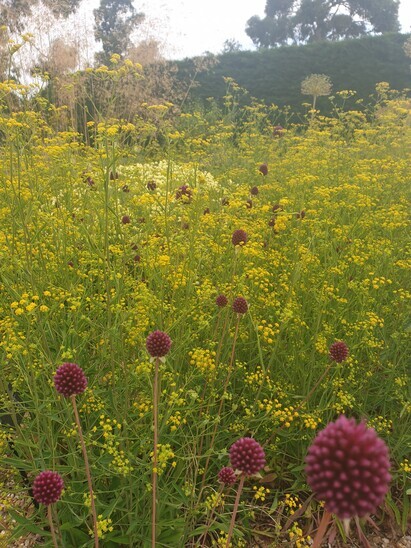 If they are perennials, they’re often the short-lived type. In the free-draining soil of our Gravel Garden some of those that thrive are: tall and airy Verbena bonariensis; silver-leafed and pungent Salvia sclarea var. turkestanica;pale yellow-flowered species hollyhock Alcea rugosa; toadflax Linaria purpurea with its pink or white spires (no simple species purple ones were allowed by Beth, only the cultivars L. purpurea ‘Canon Went’ and L. purpurea ‘Springside White’); Bupleurum falcatum which is a cloud-like mass of tiny yellow flowers in summer; and tall-stemmed magenta pink Dianthus carthusianorum. 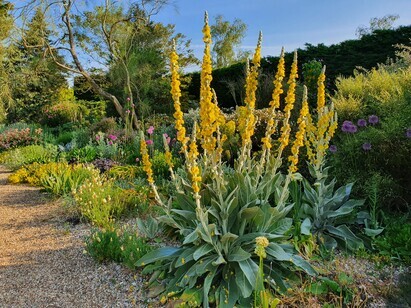 Verbascum bombyciferum (Giant Mullein)- a biennial that forms impressive, silver felted rosettes in its first year, then flowers and drops seed in its second

The biennials are different from perennials as they die once they have flowered, but not before dropping their seed. This germinates in that same year and they overwinter as small plants, flowering in year two and beginning the cycle once again.

They are an important part of Beth’s planting palette and an integral part of her style throughout the garden, and they include foxgloves and forget-me-nots. Their ephemeral nature ensures the garden looks different each year as they appear in differing amounts and in different places.

Some of the biennials that thrive specifically in the Gravel Garden are the giant mullein Verbascum bombyciferum – which appears as a huge silver rosette at ground level in the first year, and a giant spike of yellow flowers in the second; tall glaucous-leaved opium poppy Papaver somniferum; Galactites tomentosa which has thistle like flowers in purple or white, its over-wintering rosette of spiky leaves have a white marbled pattern on them; giant sea holly Eryngium giganteum which is also known as Miss Willmott’s ghost; honesty Lunaria annua; and the pale mauve spires of slug-proof Delphinium requienii. 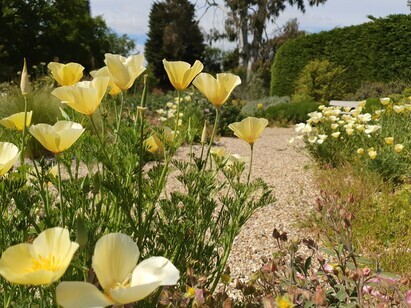 Easiest to grow are the annuals. They germinate, flower and drop their seed in the same year. Some of the annuals we use every year in the Gravel garden are Nigella damascena (love-in-a-mist); Cedric’s poppy, a field poppy ranging in colour from pink to mauve and white; dainty Beth’s poppy (Papaver dubium ssp. lecoqii var. albiflorum); a buttery cream-coloured Californian poppy Eschscholzia californica; and Ompholodes linifolia, whose flowers are a little like a white forget-me-not.

We usually rely on existing plant colonies to drop their seed in situ for the following year’s display, but sometimes we will scatter extra seed if the growing conditions haven’t been favourable for seed production, as happened in the heatwave and drought of 2018.

That all of these plants are such prolific seeders has a final benefit – they provide enough seed not only for the garden but for propagation on the nursery and for the seed packets sold in the shop. So, should you buy a Galactites tomentosa or a packet of Beth’s poppy seed, you can be sure they will have come from plants that were growing in the Gravel Garden. 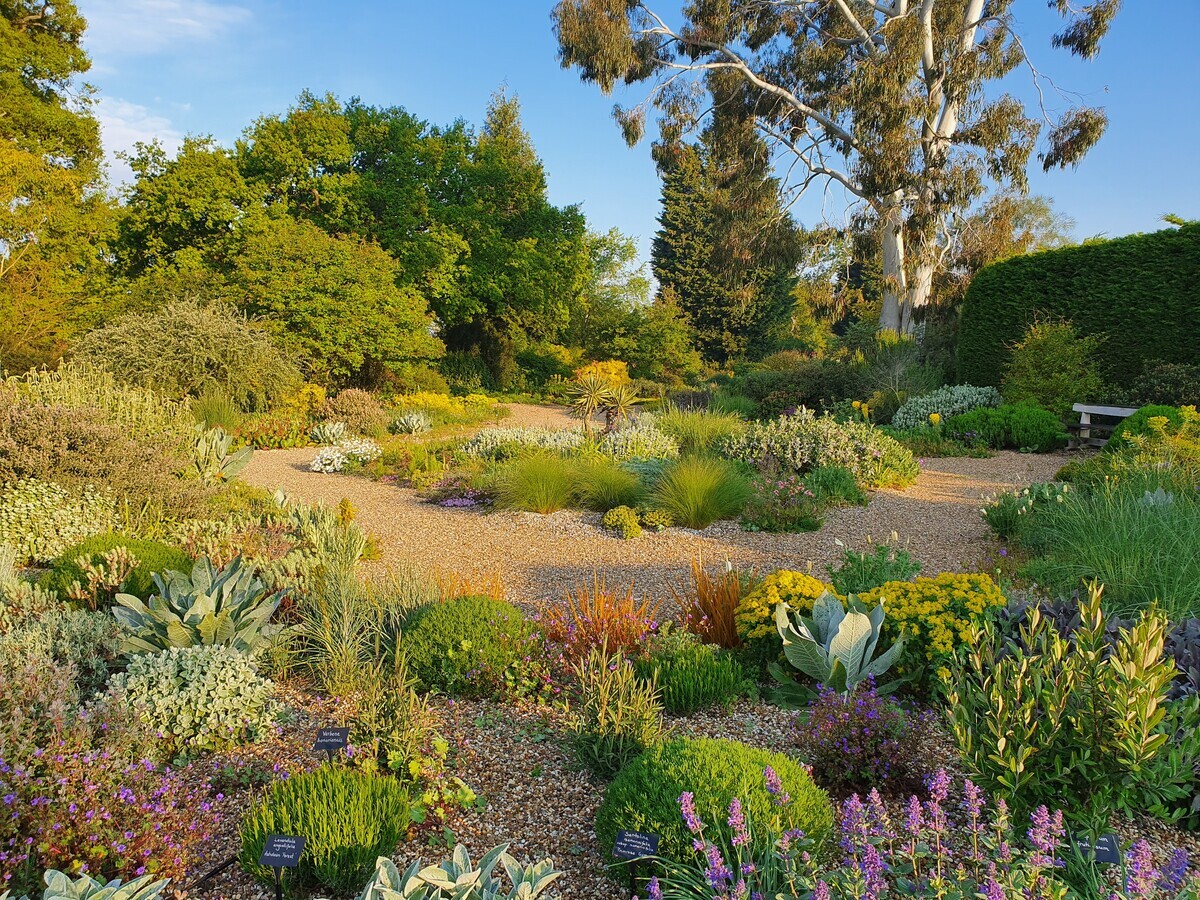 I used to contribute at Great Dixter but moved to the Cotswolds to be near my family eighteen months ago. I have always enjoyed Beth Chattos gravel garden, after GD I like the idea of making a low gravel garden on my Cotswold limestone soil and need all the advice I can gather.
Judith Hogg | 23/05/2021
Our garden is on the east shore of the River Nevis, right below the 'Ben'.
We are developing 'pebble' paths and areas inspired by this river and its beds and banks.
This advice is very helpful..Thank you so much!
maggie thompson | 23/05/2021
How lovely the dry garden has become
I can remember back to the days this area was where our coach used to park!
Well done - Beth would be proud of you.
Pam Cass | 23/05/2021
Cant wait to visit and see the gardens for myself!
Linda Manson | 23/05/2021
VIEW ALL 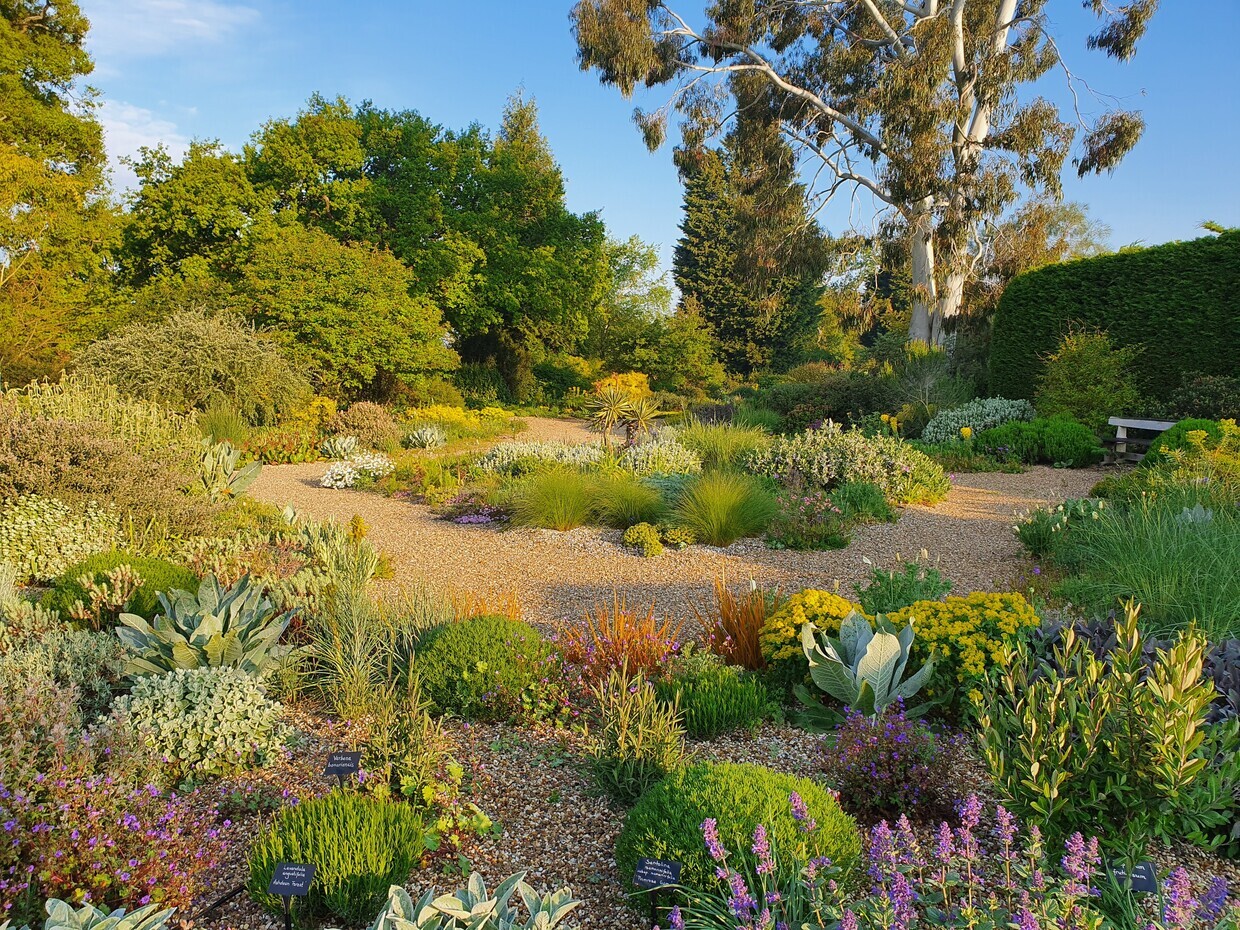 Self seeders - integral to Beth's Gravel Garden design. The 21 drought-tolerant perennial, biennial and annuals which thrive in the drought tolerant conditions here in Essex. 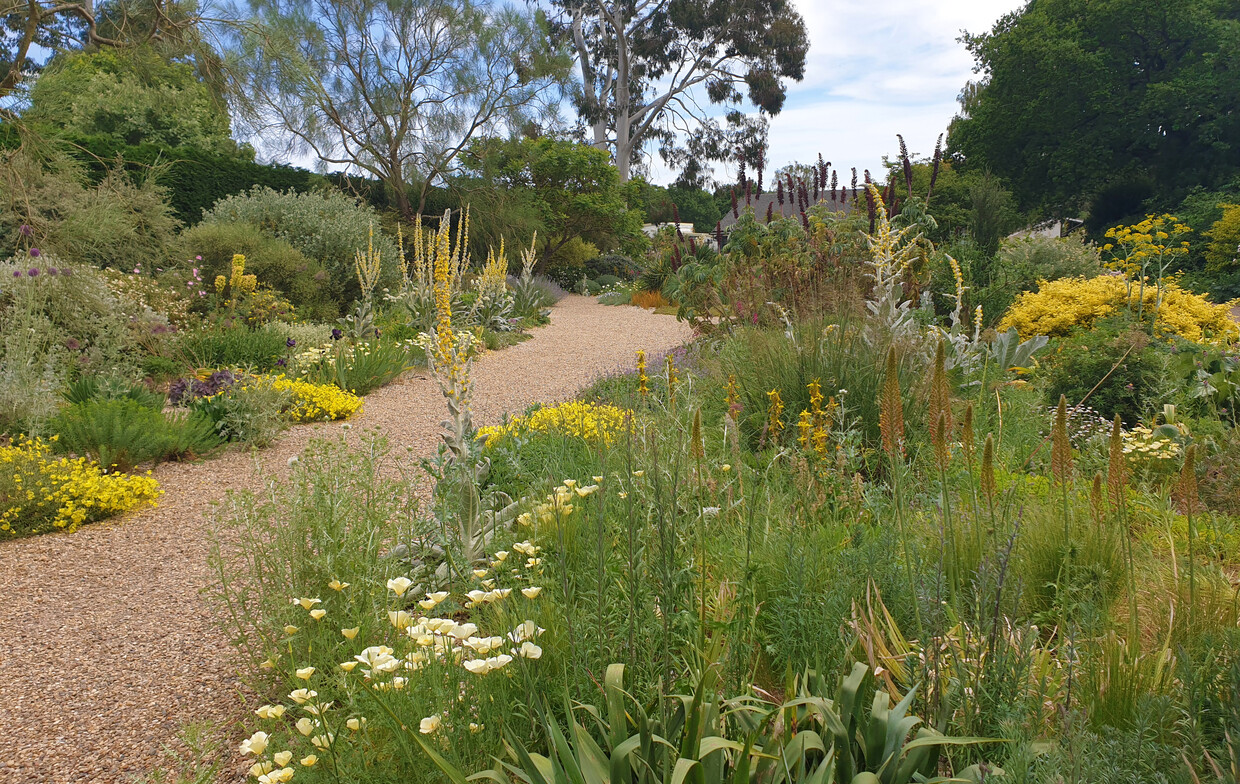 Glorious May plant tapestries for your garden 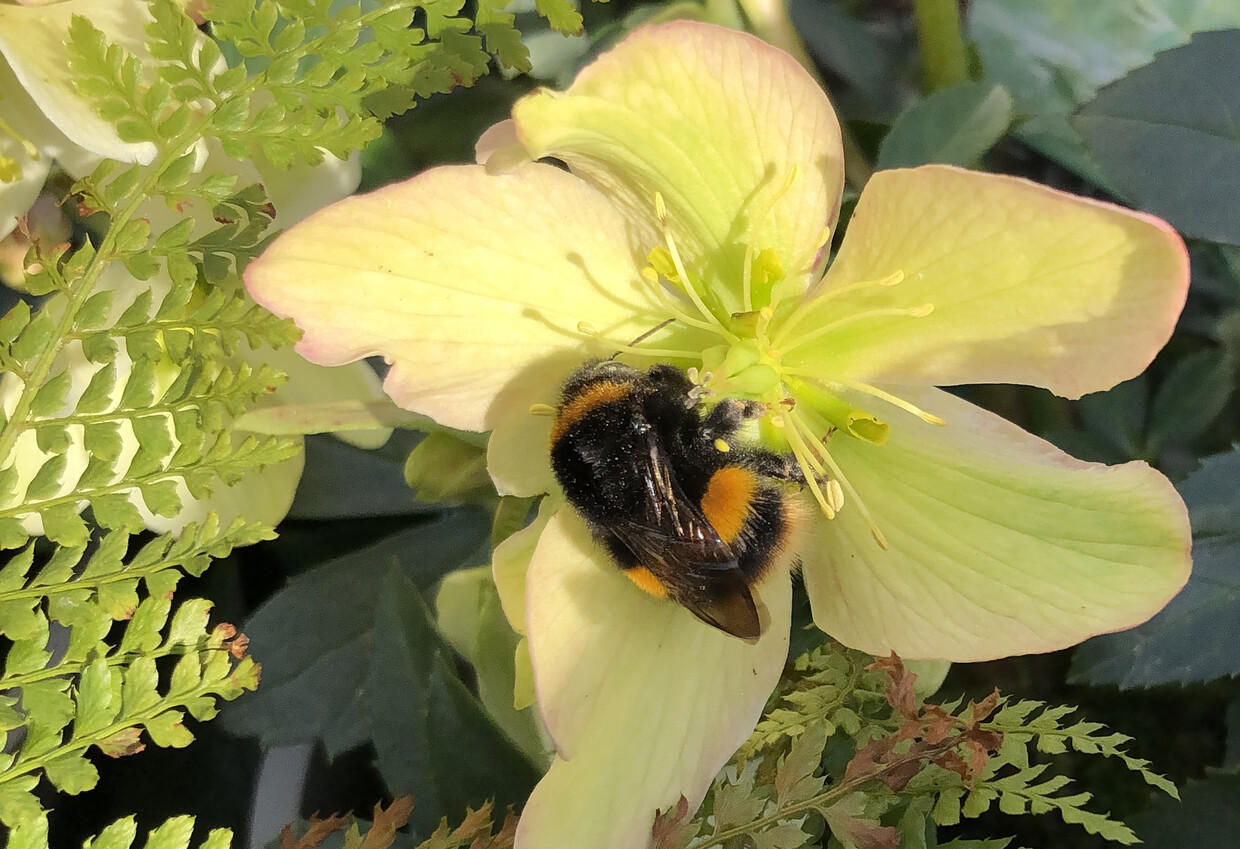